My journey to Japan

Japan is a very confusing but amazingly beautiful country. From the moment you arrive, you’re immediately thrown into a fast pace world and it’s quite easy to get lost in it all. Once you get over the heat (which aver- aged at about 35 degrees most days with up to 80% humidity!) it’s actually fairly easy to travel around. The Japanese cater for a large number of westerners and many signs are in English and most restaurants have an English menu if you ask for one “Eigo no menu wa arimaska?”

I spent the first few days in Tokyo getting acclimatised and managed to squeeze in a fair bit of sightseeing in and around the city , the high- lights being the Kegon Falls in Nikko, Harijuku Market where we found our club mascot “Yoshi”, the Gundam Café in Akihabara and Gotopachi which for those of you have seen the film Kill Bill may know it was the inspiration for the restaurant scene with the Crazy 88s (It basically looks like a smaller version of the same place, without the 88s of course!).

Omagari is a small town in the northern area of Japan near Akita which I didn’t get to see much of as most of my time was in the dojo.

We arrived the day before training was due to begin along with other members of Seiwakai from across Eng- land, Italy, Russia, Slovakia, Switzerland, Poland, Portugal, Hungary, America, Canada, India and Australia.

There’s something about training in karate that you develop a connection with fellow karateka almost instantly, even if you’ve never met them before. Within just a few hours of meeting we were chatting away about training in our respective countries, swapping stories about like we’d known each other for years. After getting acquainted it was time to get serious as the first day of training began.

In the morning, everyone met at Fujiwara Hanshi’ s hotel for what I understood was the blessing ceremony for his new dojo that was going to be built later that year. We watched as offerings were made and speeches were given, although I didn’t understand the words, the meaning behind the ceremony was clear and it was nice to be a part of something so special.

The 20 minute walk to the dojo gave us plenty of time to get to know our new friends from around the world but as soon as we arrived the focus changed very quickly.

Training with the Japanese Sensei in Japan is quite different from training with them when they come to England. Not necessarily in how you train as you still put in just as much effort, but more from how they teach. When Fujiwara Sensei comes to the UK, the seminars have a wide range of students. Most of them are brown and black belts, but there will also be a number of lower kyu grades that attend so to make sure that everyone gets something out of the seminar, the level of detail is spread across all of those who are participating. However, in Japan I only saw one or two brown belts, both of whom were 1st kyu and were also taking their shodan tests during this trip. Everyone else was a yudansha (black belt), ranging from Shodan (1st Dan) to Nanadan (7th Dan), and the vast majority of these black belts were instructors too. Because of this, Fujiwara Sensei made a point of focusing the training to black belt level and directing a lot of the content towards instructors. Seeing the difference in standards and progression at these high levels was still very clear and it didn’t take long to figure out what level each person was. Nobody had any bars on their belt to say what Dan grade they were, you showed your level by how hard and how well you trained and how much you showed your understanding of the techniques and principles of what was taught, as well as being able to perform them too.

Every class started the same: once the warm up was over (not that you needed much of one in that heat) it was straight into Sanchin kata followed by whatever was to be taught that day. But no matter what was taught, it all linked together seamlessly and came back to Sanchin kata. From kihon, through the ido kihon to pair work, kata, kumite and then back to Sanchin. As the days went on it became more and more clear as to why they call it the “30 year kata”.

A lot of us are used to training for 1.5-2 hours in a class. Here it was 3 hours of solid training, break for lunch followed by another 3 hours, within minutes of starting you were pouring with sweat. Before training started, many would spray their feet with deodorant or try to line up on the matted area before the spaces were filled. I wondered why they did this but figured out pretty quickly that the wood floor of the dojo was quite unforgiving and all of the twisting and turning during training takes its toll on the soles of your feet and by the time the first half of the day was over I was spraying my feet and wrapping them up in tape to prevent the blisters from getting any worse.

6 hours of training every day sounds long but the days never dragged on, there was always something new to learn or to focus on and even when we left the dojo we’d spend the next few hours talking about the day’s training, trying to get a better understanding of what had been taught. With this sort of training you have to be like a sponge and soak up as much as you can. The last thing I did before going to bed was to write down in my training manual we had done that day.

Before I knew it, the 6 days of training had ended and it was time for my Dan grade testing. I had been told the day before that even though my current (Seitou Ryu) grade was 4 years ago, I was only permitted to retest for Sandan (3rd Dan) and unfortunately I could not take the additional test for yondan (4th Dan). I was disappointed but to still be allowed to retest at my current level for a Japan recognised grade was a sign that they thought I was good enough as many others have come to retest and only been permitted to do so at a lower level.

The grade testing was closed to spectators with no cameras or camcorders permitted. We watched in silence as each candidate performed Sanchin, Tensho and their level kata (mine was Sanseru) followed by a 2 rounds of kumite. Once the testing was over we were sent away whilst the decisions were made. Unlike our grade tests, the results aren’t given straight away. In fact it wasn’t until later that evening during dinner with all of the English karateka and my sensei (Rod Martin Shihan) that he announced that I had passed and was now officially 3rd Dan Seiwakai.

In true karateka spirit, we celebrated with a night of karaoke, sake and beer , (not necessarily in that order!) Yes I did sing (if you can call it that), there are plenty of photos on Facebook of our celebrations.

The next day it was a speedy ride on the Shinkansen to Kyoto for more training but this time with the JKF Goju Kai instructors including Chief Technical Director Akira Shiomi Hanshi and members of the Technical Committee Senseis Sato, Muramatsu and Hirata, all of whom are 8th and 9th Dan instructors.

Adjusting to the different sensei was a challenge at first as one sensei would want you to perform a technique one way whilst another wanted it another way that was only slightly different, so found yourself adjusting your technique according to who was in front of you.

After the first hour or two was over we were split into groups to work on our kata. I got to train with Takegawa Sensei, who out of all the Japanese sensei, had the best English, so understanding what was being taught became a lot easier. We studied the bunkai in great depth and I had the pleasure of being picked as his uke which I was told was a good sign that I was training well and he was pleased with how I was doing.

Before I knew it, it was all over and the JKF Goju Kai testing was on. This was a true highlight for me as also in the group testing was my sensei of 14 years, Rod Martin Shihan and his wife Mal Sensei who were testing for 5th & 4th Dan respectively. Never in all these years would I have expected to be testing at the same time as either of them so it was amazing to have this opportunity . The testing followed a similar format as in Omagari except this time we were given the result almost immediately. We had to wait outside the dojo whilst the examiners deliberated which lasted about 20 minutes but felt like much longer. The successful candidates were announced and my name was amongst those, much to my relief.

There wasn’t enough room to fit in all of the amazing experience of Japan but I hope this has given you a taste of how felt to be totally immersed in the birthplace of karate.

See you in the dojo. 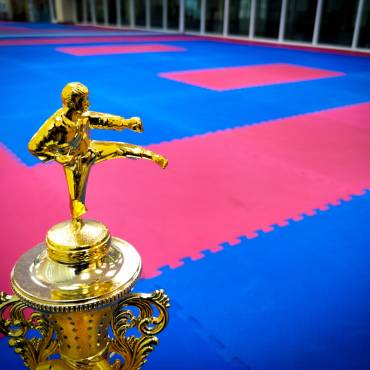 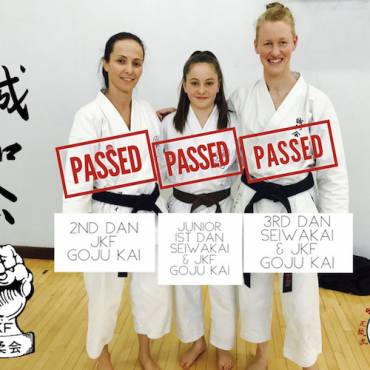