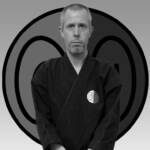 Martin began his training in 2001 after his local sports club closed down. He wanted an activity to keep up his healthy lifestyle and karate seemed to be the way to go. He trained under several instructors in Kenshukai Karate, including Tony McEwan and later on in 2005 with Sensei Richard. Martin started his instructor training as a sempai in the Wickford dojo and after building up plenty of experience before completing his instructor accreditation course with Shi Kon, he was awarded his own class at the Wickford dojo before eventually taking the reigns from Sensei Tony to run the Chelmsford dojo.

Martin is well known for his incredible memory and is often referred to as an encyclopedia of knowledge when it comes to all things technical in karate. This unique ability makes him an excellent instructor and no question ever goes unanswered in his dojo.

Martin is a fierce competitor and has collected many trophies and medals over the years. In 2009 he became a founding member of the Seitou Ryu National Squad and continues to excel in the areas of competition at both regional and national level.